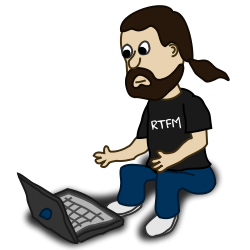 “Is your computer plugged in?”

Who hasn’t heard this chestnut from a tech support worker?  Annoying as this question is, troubleshooting is done by ruling out causes (obvious ones first) until the technician deduces the likeliest source of the problem. The tech then attempts solutions in a logical manner until the issue is resolved. It’s all very scientific.

I was watching old episodes of the television show House recently and comparing the tech support process to the diagnostic work that House’s team performs. There’s not much of a difference, except there are marginally fewer biohazards in the tech lab.

If you’re familiar with House, you’ll know that it takes testing, research and brainstorming to arrive at a diagnosis (hopefully in time to save the patient’s life), and sometimes the people involved make the process harder than it needs to be.

Here’s how to be a good tech support patient:

1. Be honest. Dr. House often says “everybody lies” – lies normally come from fear, and in cases of computer problems the user is often afraid of looking foolish, or of getting in trouble at work. Be brave. If you made a mistake and deleted some important operating system files or opened an email with a virus, own up to it. We’ve all done regrettable things to our computers at some time; it’s better to confess and get it fixed sooner, especially if you’re on your employer’s time. Admitting to a mistake usually wins you respect from the technician, whose job is much harder if he or she has to guess at what you’re not sharing and work around gaps in the information.

2. Copy down any error messages you see. You’ve probably seen “MS Outlook error x000752 something something” or a similar sentence – those obscure error codes are often the key to the solution. The more info you can provide upfront, the better.

3. Know what you were doing when the problem started. If you call your doctor’s office to complain about a headache, it’s helpful to say that you just fell off the roof while juggling axes – that narrows down the issue, otherwise the doctor is likely to tell you to take an aspirin and call back in the morning.

4. Be aware that apparently dumb or unrelated questions (usually) serve a purpose. The tech is trying to eliminate possibilities, and if you’re asked about your browser version while you’re getting help for an email problem, there may be a good reason for it. Interconnections abound under the surface, and a problem in one place can affect other things in a way that would seem to defy logic.

5. Don’t expect the tech to know the answer right away. Your doctor can’t look at you and immediately tell whether your headache is a migraine, a brain tumor, or whether you were just eating ice cream too fast; that’s why so many medical tests exist. (Even if you’re still eating the ice cream at the time, it doesn’t mean you don’t also have a migraine.)

6. Make it a team effort. You’re struggling to overcome the problem, and the technician is on your side. Have a good attitude. A sense of humour is a definite bonus.

7. Turn it off and on again before you call.  I once worked with a technician who was nicknamed “Reboot” because that was his first advice to anyone who asked for help. You’d be amazed how often that works.